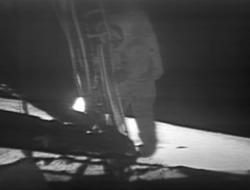 The demonstrated success in space flight is the result of electronic technology developed at Cape Canaveral, the J. F. Kennedy Space Center, and other sites. A wide variety of advances in radar tracking, data telemetry, instrumentation, space-to-ground communications, on-board guidance, and real-time computation were employed to support the U.S. space program. These and other electronic developments provided infrastructure necessary for the successful landing of men on the moon in July 1969 and their safe return to earth.

The advent of the Cold War and the increase in civilian air traffic spurred continued development in radar and its use in detection, guidance, navigation, telemetry, and remote control.In addition to the problems of competing with the Soviets in military aircraft, missiles, and manned and unmanned spacecraft, the Western nations worked out the political and economic aspects of scheduled international air travel. Technological advances in the early 1950s included pulse-compression radar, which achieved high resolution with the required large-signal bandwidth. These advances and others eventually led to pulse-doppler radar. Synthetic aperture, or ´side-looking´ radar improved the cross-range resolution. Powering these devices from aircraft engines was also a challenge that was eventually answered by the development of a hydro-mechanical constant-speed drive. These inventions led to extremely complex military systems, for example the U.S. Air Force's Bomarc surface-to-air missile.They also allowed airborne weather avoidance and the beginnings of ground-based electronic weather observation.

While advances in civilian and military aviation continued, the late 1950s created a new theater for technological development and completely changed the landscape of aeronautical electronics.In October 1957, the Soviets launched Sputnik, the first man-made satellite, and the race for space had begun.The ground had been paved in 1946 when a team from the Army Signal Corps bounced a radar beam off the moon and detected the echo. Although originally justified by military uses and national prestige, the communications and navigational uses of space soon became obvious. For example, although Sputnik broadcast only a beacon signal, it was discovered that its Doppler shift revealed the position of the observer. Within the United States, although the Department of Defense continued to receive a great deal of funding for both air and space electronic research, the National Advisory Committee on Aeronautics (NACA), in existence since 1916, became the civilian-based National Aeronautics and Space Agency (later Administration)-NASA!

On 12 April 1961 the Soviets sent Yuri Gagarin into space, after which U.S. President John Kennedy pledged that America would put a man on the moon by the end of the decade.The complexity of space systems needed for manned flight dwarfed even that of the most sophisticated military systems of the 1950s.For example, telemetry had to be expanded to include not just instrument signals but the vital signs of the astronauts. Radar could help lunar landers determine their altitude and velocity relative to the surface and surface. Ground-based digital computers calculated trajectories to precision far beyond what had been possible with analog computers.At planetary distances, one has to account for the finite speed of light.On manned missions particularly, space-borne digital computers performed attitude control.They permitted new functions to be done on-board, such as telemetry and redundancy management. One of the greatest technological achievements of all human history took place in July 1969 when Neil Armstrong and Buzz Aldrin set foot on the moon.

The unmanned exploitation of space for telecommunications had begun with bouncing signals off the moon, and by the end of the 1950s people had heard U.S. President Eisenhower´s pre-recorded Christmas message, broadcast from the SCORE satellite in 1958.In 1960, the ECHO balloon was launched to replace the moon as a passive communication relay. TIROS I, the first weather satellite, and Transit, a navigation satellite used by the U.S. Navy to aid submarines, were launched in the mid 1960s.TELSTAR, a commercial venture by AT&T, reached orbit in July 1962 and demonstrated real-time active communication via satellite, including the first transatlantic television broadcast. These technological breakthroughs led to important international political developments in the sharing of space and spectrum. Geosynchronous orbit as a method for global communication had first been proposed by Arthur C. Clarke in 1945. Early Bird, the first Intelsat satellite, began the era of geosynchronous satellite communications in 1965.The 1960s also saw the first unmanned planetary probes, with the launching of Mariner 2 on 27 August 1962, and ground-based radio telescopes first listening for evidence of extraterrestrial intelligence.

There were also developments in military and civilian aviation, particularly in the increased use of solid-state digital systems. Space, military, and civilian aviation, administratively unified in the Soviet Union, also came together in the United States in the growth of a tremendous aerospace industry with close ties to both NASA and the Department of Defense. Sophisticated innovations occurred in navigation and guidance, such as the coaxial magnetron, with its improved oscillator stability, and over-the-horizon radar.