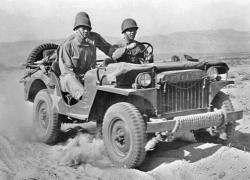 Although not the first four-wheel-drive vehicle or the first designed for rough, multipurpose field use, the Jeep MB was built as an unusual combination of these and other features of modern vehicle design in the World War II era.

The prototype four-cylinder "Quad" was designed in 1940-41 by Delmar Roos. Between 1941 and 1945, more than 637,000 Jeep vehicles were produced by the Willys-Overland Company (now the Chrysler Corporation) and the Ford Motor Company (under license). The basic MB design, the first model produced in quantity, led to a number of adaptations including amphibious and airborne versions, ambulances, tractors, and half tracks.

The origins are traced back to the late 1930s, when the US Army called for a reconnaissance vehicle or armored personnel carrier. Willys won the first large-scale production contract for the MB, which incorporated the best features from three competing bid entries. The key contribution to the Willys-Overland vehicle was the 60- horsepower "Go Devil" engine designed by Roos.

Two other Jeep MBs are displayed in museums, both from 1943: one at the Henry Ford Museum in Dearborn, Mich., and one at the Smithsonian in Washington, D.C. The vehicle displayed at the Jeep House in Toledo is from 1947, but remains closest to where it was conceived and built at the original factory.