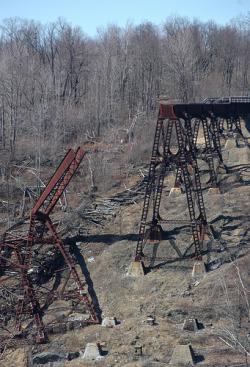 The workforce consisted of less than 100 men, yet they finished construction in just 94 days. Such speed was possible due to the elimination of scaffolding. Instead, iron rods were used to support construction of the trusses between the towers, and workers moved back and forth across the rods. A dangerous venture, yet no workers were seriously injured.

The Kinzua Railway Viaduct, built by the New York, Lake Erie & Western Railroad, was an iron trestle bridge spanning the Kinzua Valley. It was a critical structure in facilitating the transport of coal from Northwestern Pennsylvania to the Eastern Great Lakes region, and is credited with causing an increase in coal mining that led to significant economic growth.

Upon completion, it was the highest and longest railroad bridge in the world.  The rails were 301 feet above the valley, with a total length of 2,052 feet. The $275,000 viaduct required a record-breaking 3.5 million pounds of iron.

By 1900, railroad engines were nearly 85% heavier, exceeding the capacity of the iron structure; so a steel replacement bridge was built using the original foundations. Freight service over the bridge ceased in 1963, and the bridge and surrounding area were designated the Kinzua Bridge State Park. On July  21, 2003 a tornado touched down by the viaduct causing 11 out of the 20 towers to collapse. The failures were caused by the badly rusted base bolts holding the bases of the towers to concrete anchor blocks embedded into the ground.Today with a new observation deck and visitor's center, the bridge offers pedestrians an exceptional view of the Kinzua Valley.