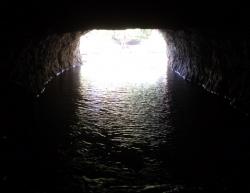 The Harpeth River makes a tight bend around a steep limestone ridge, losing 17 feet of elevation in a run of 5 1/2 miles. Bell excavated a tunnel through the limestone ridge, creating a shortcut for the river. The hydropower derived from this drop in elevation was used to drive the Patterson Iron Works built by Bell.

Montgomery Bell's Tunnel is one of the oldest tunnels in America. Though historic records are incomplete, it is likely that Bell both located the site and designed the tunnel himself. Slave labor was used to excavate the tunnel. The project is also significant because it is believed that all excavation for the 290-foot tunnel was performed using hand drills and black powder.