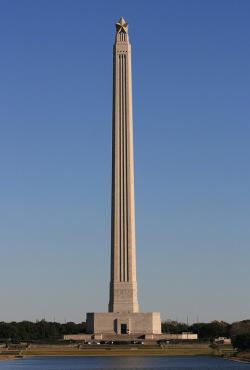 The San Jacinto Monument commemorates the decisive 1836 battle near the banks of the Buffalo Bayou and the San Jacinto River that allowed Texas to win independence from Mexico. It is the world's tallest monument, rising 15 feet higher than the Washington Monument.

In 1936, Daughters and Sons of the Republic of Texas led lobbying efforts to allocate funds for a monument that would mark the importance of the Battle of San Jacinto. Ground was broken on April 21, 1936 - 100 years to the day after the victorious battle.

This towering symbol of Texas' freedom laid the groundwork for many future high-rise structures, particularly those built on expansive soils and/or subject to heavy wind loads caused by severe tropical storms.