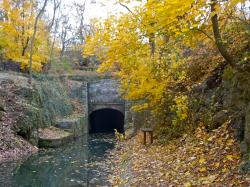 According to oral history, George Washington visited the canal diggings in 1792, and then again in 1794, while he was accompanying troops to suppress the Whiskey Rebellion in Western Pennsylvania.

The Union Canal Tunnel was a crucial structure allowing the connection of the eastern and western branches of the 82-mile Union Canal. The canal snaked from Middletown on to Reading, where it converged with the Schuylkill River, providing a direct water link from Harrisburg to Philadelphia. The oldest existing tunnel in the U.S., it was created through 729 feet of solid slate rock with veins of hard, flinty limestone. It was constructed through the ridge dividing the Quittapahilla Creek and Clark's Run.

As early as the 1760s, consideration was given to constructing a waterway that would speed shipments between the east and the west. In 1791 the Pennsylvania Assembly passed an act authorizing the formation of the Schuylkill and Susquehanna Navigation Company, whose purpose was to connect the two rivers by canal. Work was begun the next year, but suspended in 1794 due to financial difficulties. Frequent attempts to revive the project were unsuccessful until the Union Canal Company was created by another act of the state assembly in 1811.