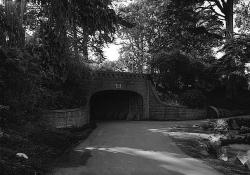 Alvord Lake Bridge, along with many of Ernest Ransome's reinforced concrete buildings, survived the 1906 San Francisco earthquake and several subsequent tremblers with no damage. Built in 1889 by Ernest L Ransome of New York, this reinforced concrete arch bridge in San Francisco's Golden Gate Park is believed to be the oldest concrete bridge in the United States that used steel reinforcing bars to improve the behavior of the concrete. The reinforcement consists of a series of square cold-twisted steel reinforcing bars, an invention of Ransome. They were embedded longitudinally near the underside of the arch and bent in approximately the same curve as the arch. The Alvord Lake Bridge has a 29-foot-long span; but by the turn of the century, reinforced concrete arch bridges were being built with spans more than 100 feet in length. Facts 1. The bridge is a single arch, 64 feet wide with a 29-foot-long span. 2. Lake Alvord Bridge, along with many of Ransome's reinforced concrete buildings, withstood the 1906 earthquake and many subsequent tremblers and is still standing today.