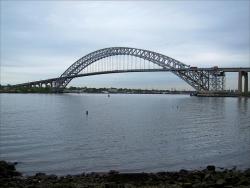 The longest steel-arch bridge in the world for 46 years, the Bayonne Bridge continues to be celebrated today as a major aesthetic and technical achievement. The 1,675-foot bridge replaced a ferry service which until then was the only means of crossing from  the Bayonne peninsula to Staten Island. While providing this essential link in the transportation network of greater New York City, the bridge's mid-span clearance of 150 feet also allows for unobstructed navigation on Newark Bay, the main shipping channel to the inland ports of Newark and Elizabeth, New Jersey.

The engineering achievements of the Bayonne Bridge include the first use of manganese steel for main structural elements, several advances in structural analysis, and an innovative system of falsework used in its construction. Its design is one of many in the New York City area representing the work of Othmar H. Ammann, whose majestic George Washington Bridge was opened less than a month earlier.