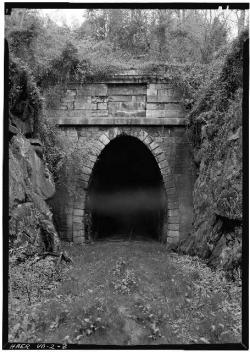 One of four single-track tunnels built by the Blue Ridge Railroad, the 4,273-foot Crozet Tunnel was constructed at a time when hand drills, pickaxes, and black powder amounted to state-of-the-art tunneling technology. At the time of its completion, it was the longest railroad tunnel in the world. Envisioned and built by Claudius Crozet, a French-born educator and civil engineer, the tunnel remains a testament to his belief in advancing rail transportation even when faced with numerous difficulties.

In the nearly 10 years required to build the tunnel, Crozet was forced to deal with fighting between laborers, a cholera outbreak, a national financial crisis, and persistent personal criticism. Overseeing work crews boring from each end, Crozet encountered hard rock, frequent rock slides, unusually heavy winter snows, and problems with ventilation and drainage that adversely affected working conditions. To honor Crozet's accomplishment, a nearby town was named after him.