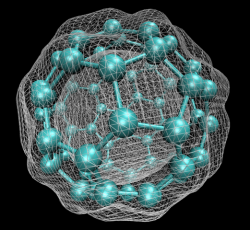 In early September 1985, a team of scientists discovered a previously unknown pure carbon molecule, C60, which they dubbed buckminsterfullerene. The name was chosen because the geodesic domes of Buckminster Fuller provided a clue that the molecule’s atoms might be arranged in the form of a hollow cage. The structure, a truncated icosahedron with 32 faces, 12 pentagonal and 20 hexagonal, has the shape of a soccer ball. Nicknamed buckyballs, this first known stable molecular form of carbon not only opened up a new field of organic chemistry but also, through the development of carbon nanotubes, a new field of materials science. In 1996, Robert Curl, Harold Kroto, and Richard Smalley won the Nobel Prize in Chemistry for the discovery of the fullerenes.