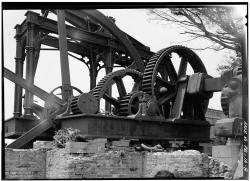 The La Esperanza sugar mill steam engine is one of the few remaining American links to the pioneer beam engines of the English inventors Thomas Newcomen (1712) and James Watt (1769). The engine was built in 1861 in Cold Spring, New York, by the West Point Foundry. The general arrangement and details, including the Gothic embellishment, are typical of machinery of the period. The straight-line motion of the piston rod is accommodated to the arc of the moving beam end by a parallel motion. Watt regarded this ingenious linkage as the invention of which he was most proud.

The sugar cane plantation was founded in 1850 by Don Jose Ramon Fernandez y Martinez, Marquis of La Esperanza. The Conservation Trust of Puerto Rico restored the machinery as part of a sugar museum.