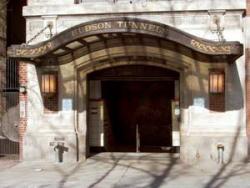 A transportation tunnel under the Hudson River connecting Manhattan and New Jersey was first considered in the 1860s, fueled by New York City's rapidly growing congestion and the inadequacy of existing ferry service to population centers across the river. DeWitt Clinton Haskin, an engineer formerly with the Union Pacific Railroad, started the project in 1874 and subsequently endured an extended lawsuit, several failures of the tunnel wall, and an exhaustion of funds before quitting in 1887 with only 1,600 feet completed.

Two years later, a British team took up the project only to be halted in 1891 by a financial crisis, just 1,600 feet short of completion. William G. McAdoo, a Southern attorney who later served as Secretary of the Treasury under President Woodrow Wilson, finally completed the tunneling project. McAdoo later added another tunnel, extended the rail line into upper Manhattan, and helped connect its 33rd Street station, later known as Pennsylvania Station, with commercial real-estate development.

Tags
Eads
Railroad
Tunnel
Hudson
Haskin
Cochrane
McAdoo
Haskin
Manhatton
"...[O]ne of the greatest engineering feats ever accomplished, greater perhaps than the Panama Canal will be when opened, considering the obstacles which had to be overcome..."
- The New York Times, 1908
Image Credit
Courtesy ascemetsection.org
Image Caption
The Hudson and Manhattan tunnel was the first large transportation tunnel constructed under a major river in the United States..