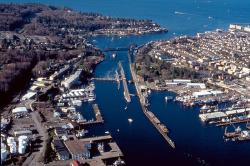 After more than 50 years of contention and debate, dredging began in 1911 on an eight-mile channel connecting Puget Sound, Seattle's gateway to the Pacific, to two inland freshwater lakes, Lake Washington and Lake Union. With the completion of the Lake Washington ship channel and Chittenden locks, coal and logs from the interior had a dedicated water route to the ocean, and the city's 4 1/2 miles of coastal harbor burgeoned into 100 miles of commercial, industrial and recreational piers and wharves.

The project transformed Seattle into a major metropolitan port city and advanced the practice of engineering on several fronts. The locks use an innovative drainage system to keep Pacific saltwater from damaging the inland freshwater ecology. They also incorporate one of the first fish ladders in the U.S. The project contributed significantly to the use of concrete in lock construction and to the development of cathodic protection systems to fight corrosion of steel members.