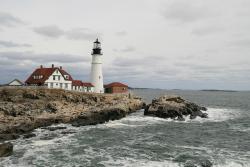 The Portland Head Light was the first lighthouse to be constructed in Maine and the first one completed and put into service by the Federal government under the Lighthouse Act of 1789, which moved to place all lighthouses under federal control. While work had begun on the lighthouse in 1787 by the State of Massachusetts which, at that time, had jurisdiction over Maine, it was completed by the Federal government. When this lighthouse was being built, Portland was the sixth largest port in the country, the closest port to Europe and had significant trade with the Caribbean. Lighted in January 1791 by the Federal government, the lighthouse served a major role in protecting the economic investment made in this area. It facilitated shipping and, thereby, played an important role in the national economy by keeping the shipping routes safe and minimizing losses.

Since this was the first lighthouse completed under the Federal government's jurisdiction, President Washington gave it his personal attention. He ordered that it be constructed of rubblestone taken from the fields and shores of Cape Elizabeth. The use of local construction materials minimized construction costs and served as a model for future projects. It has also served as a model of how existing projects may be adapted to better serve the public as needs change. Although fitted with numerous different lenses as technology changed and altered in height to improve visibility, the tower has never been rebuilt.