The Shovel That Helped Build America 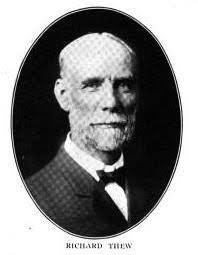 Sometime in 1894, while his Great Lakes steamer W P. Thew lay tied to a wharf on the banks of the Cuyahoga River in northeast Ohio, Capt. Richard P. Thew whiled away many hours as men laboriously unloaded his iron ore cargo onto the wooden docks. While pacing the wheelhouse, he watched with curiosity and then puzzlement as a railroad steam shovel took one clumsy scoop of ore after another and dumped it into a hopper car sitting on nearby railroad tracks. During the shovel’s motion, the bucket’s teeth gouged the dock’s timbers and left much of the ore behind.

While good at gorging and gouging earthbanks, railroad shovels were poor at taking a polite scoop on level ground. Railroad shovels —built for trundling along on temporary rails, digging canals and railroad cuts —had a dipper stick that rotated around a pivot point on the boom and did not allow any motion other than heavy- handed arcs. (To visualize this particular problem, think of letting a broom hang vertically by the handle so that it touches the floor. Then bring the lower end up until the broom is horizontal: the bristles of the broom sweep the floor for only a few inches before heading upward.)

Thew wondered whether he could tame this wood-chomping monster by mounting the dipper with a sliding pivot, which would more closely mimic the agility of the human arm. This amateur’s insight, along with a slew of other improvements, was about to revolutionize the customer’s expectation of what a steam shovel could do.

Remarkably, no one had addressed this particular problem with the steam shovel since Philadelphia civil engineer William Otis had patented the first one in 1839. Otis’s first “Steam Excavator” helped dig the Welland Canal in 1843, displacing dozens of workers who grew so angry that the company had to post guards on the site. Otis died shortly before his first excavator was sold in 1841; for decades afterward, his successors stifled innovation by declining to license production of the excavator freely around the United States, reasoning that their steam- shovel monopoly brought them a significant advantage in bidding for earthmoving jobs.

A half-century later, Otis’s ungainly design still dominated American shovels, featuring a crane boom sticking out at a diagonal that slewed left or right from a hinged base on one end of a flatcar. Halfway down the crane boom reached a dipper stick with a bucket bolted to the end. Power came from a stationary steam engine bolted at the other end of the car, which transmitted its energy via friction clutches, gears, drums, and chains. A chain, running over the top of the boom and reaching down to the bucket, dragged it through the dirt. A hinged door at the bottom of the bucket dumped the load into wagons or railcars. (The toothed bucket gave the steam shovel its affable appearance: when the dipper was raised high and the door hung open, the bucket resembled the head of a long-necked dinosaur, openmouthed with surprise.) Tunnel vision—perhaps “trench vision” is a better term in this case —was holding American industry back from adapting its big iron to fit other niches. Digging a sewer trench along a city street or loading up clay at a brick factory, for example, were no jobs for a 70-ton railroad shovel.

By focusing on just one of those unopened niches, the handling of iron ore at fragile docks, Thew helped put an old industry on a new track and converted himself from a hardscrabble boat captain to a landlubbing millionaire. His fourth career began at age 48 — he had tried farming and selling hardware before hitting the inland waters —when in 1895 he enlisted shovel expert Holley Harris to transform his ideas into blueprints, then hired a Cleveland job shop named Variety Iron Works to build a working prototype. However rough in appearance, it attracted the attention of Marcus A. Hanna, an iron magnate and Republican kingpin, who bought the first one to run his Cleveland Pittsburgh Ore Dock more efficiently. Thew gave up his boat job to meet the ever-mounting demand, and in 1899 he joined with businessmen in Lorain, Ohio, to open a factory.

The success of what catcallers dubbed “Thew’s merry-go-round” came as a rude surprise to loyal users of Bucyrus, Marion, Vulcan, and other such sturdy machines, particularly because the newcomer had been designed by a man without heavy construction or mining experience.

The disparaging term referred to the shovel’s most visibly striking feature, its turntable, which looked like more trouble than it was worth—to the manufacturers, at any rate. While British maker Whitaker & Sons had offered the first steam shovel with a full-swing capability 10 years earlier, no American steam shovel could swing in much more than a half- circle, because they were all mounted at the ends of flatcars. The ability to turn completely sped up the work greatly. In time every operator would insist on it. Such a shovel could load cars in all directions, carry its own counterweight to balance much more effectively at full reach, and dig its way out of a landslide that would trap a railroad shovel.

There was more: Thew’s compact machine needed no rails; with solid ground or planking underfoot, it operated on steel wheels driven by the shovel’s steam engine, the operator steering by swinging the turntable from side to side. (Caterpillar tracks would come later.) Wire rope did the heavy lifting, a distinct advance over the standard chain-lift because steel cables ran more safely and smoothly over the sheaves. Thew’s attention to simpler controls reduced the crew size from three men to two. Innovation appeared even in the smallest details. The dipper stick, for example, rotated if the bucket’s cutting edge ran into a rock on one side while scooping, thus minimizing wear and tear. On conventional models such off-angle impacts imposed severe torsional stress that loosened rivets every working day.

And in a unique feature that directly addressed the ore-handling market, Thew installed a “horizontal-crowd feature” that carried the piyot for the dipper stick, deployed by the operator along a horizontal track mounted on the boom. This allowed the bucket to slide forward five feet and take a level bite before the lift-cable swung it upward. (Anyone wielding a house broom will find himself following the same economical motion as the Thew machine takes: sweeping level along the ground, then curving upward to complete the stroke.)

Ironically, the simultaneous advance of mechanized ore handlers at the Lake Erie ports would soon knock out this particular niche. The foremost of these was the gargantuan Hulett high-speed unloader, which drastically lowered the cost of ore boat operations. But like a hunter who misses his doe but takes down an eight-point buck in the bushes, Thew hit his mark far from the ore docks. Because nobody else was offering such a small and nimble machine, he sold shovels to Klondike gold miners, builders of western irrigation ditches, and street contractors whose operators found the leverage offered by the horizontal-crowd mechanism ideal for prying up old slabs of concrete. One Thew shovel helped dig a lock through the mountains for the Panama Canal.

In time the greater dexterity of a new class of back-dragging shovels —driven by internal combustion engines, and actuated by hydraulic fluid —would push all steam shovels out of the catalogs, but Thew adapted. In 1914 his company was one of the first in America to introduce a gasoline-powered shovel. All shovels sold today run on diesel power except for strip-mine behemoths, which drag electric cables behind them.

But the end of production isn’t the same as extinction. Hundreds of Thew shovels worked mines and road cuts into the 1950s, and a few can still work up a head of steam, which brings us back to the oldest operational model in North America, the Thew Model 0. Weighing a little less than 15 tons, age 97, it’s about the same size as the heroine of Virginia Lee Burton’s classic storybook, Mike Mulligan and His Steam Shovel.

The Mike Mulligan of this antique rig is retired coalmine machinery operator Robert Kelly of McDonald, Pennsylvania, who wisely took up the hobby of restoring big-iron collectibles before prices got out of hand. He owns a dozen shovels and bought this one from a collector in Canada. It guzzles a thousand gallons of water per working day and burns enough coal to keep Kelly’s fireman very busy.

“I always liked steam engines, the smell and sound of them,” says Kelly. As did Mulligan’s crowd-pleasing shovel “Mary Anne,” his Model 0 will be taking another bow this August at the National Pike Steam, Gas and Horse Association’s show near Brownsville, Pennsylvania.