“I was able to be creative and work as hard as I wanted.” 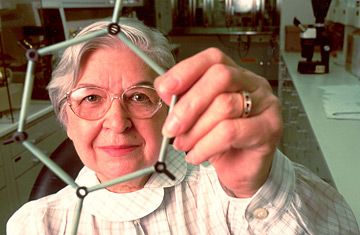 D HER B.S., WITH a major in chemistry, from the Carnegie Institute of Technology (now Carnegie Mellon University) in 1946, she didn’t have enough money to pursue her dream of going on to medical school. So she accepted a research job with DuPont, hoping to eventually get a medical degree. But she discovered that she liked the work so much, with its constant challenges and the university-like atmosphere, that she decided to stay.

I think you have to inspire young people to believe in themselves and not to fear thinking differently.

She was one of a small number of women in America working in chemical research. DuPont had already commercialized nylon with great success and was on its way to doing the same with Dacron polyester, Lycra spandex, and eventually Nomex aramid. The search was on for the next-generation high-performance fiber. In 1964 she provided the breakthrough, discovering that under certain conditions, the molecules of extended-chain aromatic polyamides would form liquid-crystalline solutions, and these in turn could be spun into highly orientated, very strong, and very stiff fibers. The result was Kevlar—a material best known for its use in bulletproof vests—and a new branch of polymer chemistry.

Kwolek has earned 17 patents and the highest honors in her field. She was inducted into the National Inventors Hall of Fame in 1995 and received the National Medal of Technology in 1996. About the Hall of Fame she says, “I think there is a great need for recognition of scientists and other people who really do things that benefit mankind. Although sports brings great enjoyment, I don’t think the benefits derived in any way approach those gained from discoveries in medicine, chemistry, or physics. I consider induction into the National Inventors Hall of Fame one of the highest honors in the United States.” 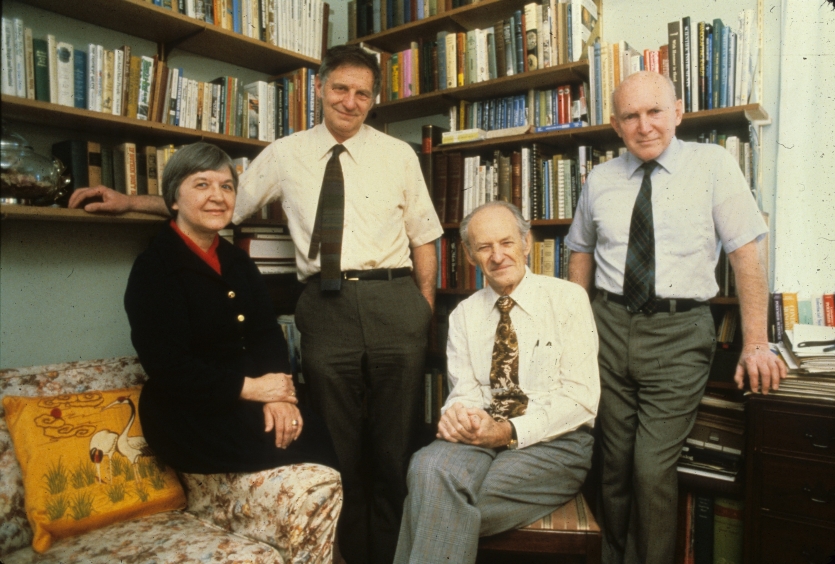 During a visit to the Hall of Fame, in Akron, she discussed chemistry, Kevlar, and her deep interest in encouraging young women to pursue careers in scientific research.

Where did you do most of your inventing?

I did all my inventing at the DuPont Experimental Station, in Wilmington, Delaware, where I worked in the Fibers Department, Pioneering Research Laboratory, for 36 years. Before that I spent 4 years with DuPont in Buffalo, New York, with the same group of scientists, while the lab in Wilmington was being built. I got considerable independence, and I certainly appreciated it. I think this was because of the nature of my supervisor and the way he liked to work. He had his own interests that kept him very busy. He was always writing or attending meetings or doing his own research. With this freedom I was able to be creative and work as hard as I wanted.

Are you satisfied with the state of research today?

I’d like to see corporations place greater emphasis on long-term research. At present the tendency is for short-term research and immediate answers. You must have time to think, and in the present environment everything is rush, rush, rush. I don’t see how you can be creative if you’re constantly distracted. You need time to read, to think, and to keep up with the literature. Discoveries, particularly those that open a new field of chemistry or technology, generally take much more thinking and work than just making a modification to an existing product.

Tell me about your moment of discovery.

It was terribly exciting because it was so unexpected. I had been assigned to look for the next-generation high-performance fiber. I started working with the more intractable para-orientated aromatic polyamides, which are made up of rodlike molecules, unlike the very flexible molecules in the nylon that you find in stockings and other clothing. This project involved quite a bit of work, not only in making the polymers but also in trying to find a solvent for them. I finally succeeded in finding a solvent, but the solutions turned out to be unlike anything we had previously seen in the laboratory. They were cloudy, opalescent upon being stirred, and of low viscosity. Ordinarily these solutions would have been discarded. 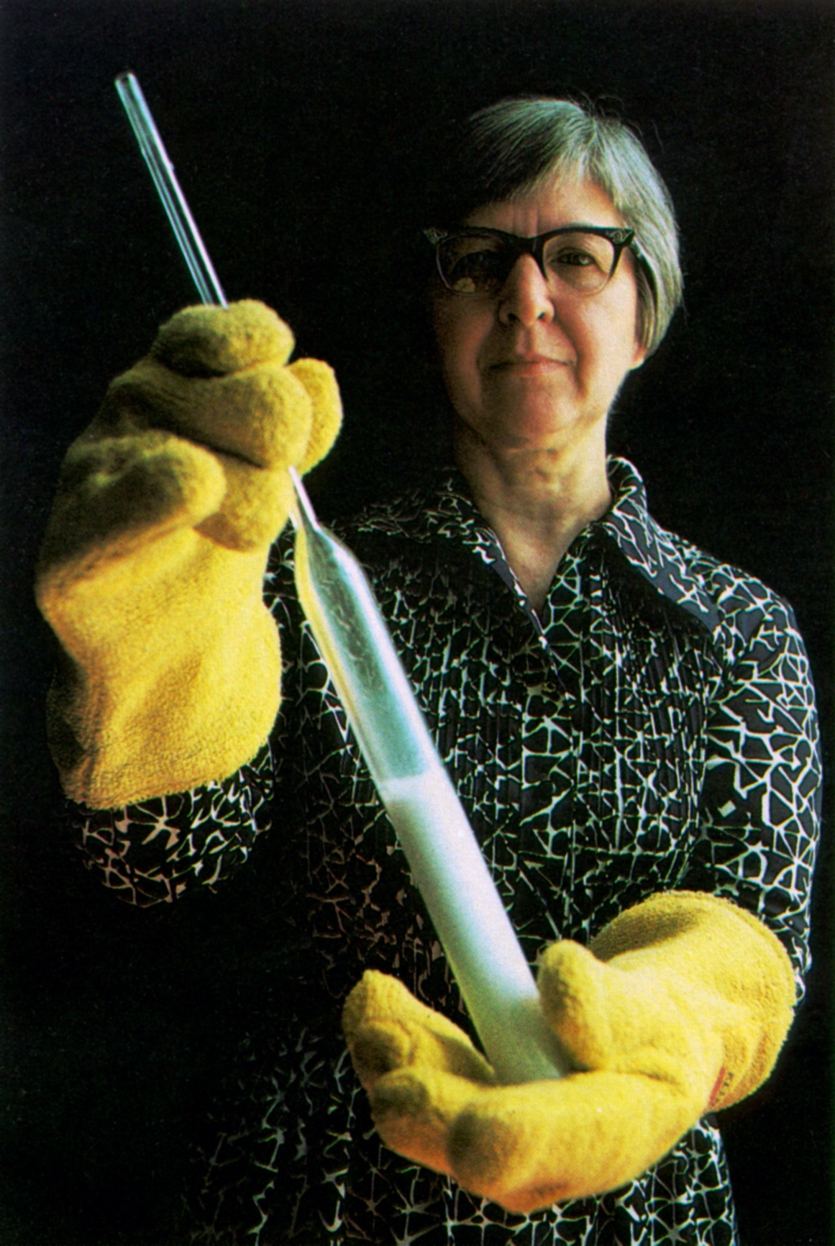 To get a fiber, you have to force a polymer solution through the very tiny holes of a spinneret. I talked to the person in charge of the spinning unit, but he refused to spin my cloudy, low-viscosity liquid-crystalline solution. He said it would plug up the holes of his spinneret and, furthermore, it had the viscosity of water, unlike regular polymer solutions. He assumed the cloudiness was due to the presence of paniculate. After much discussion with me, he did spin it, and it spun with no problems. The first sign that we really had something unusual occurred as I stood by the spinning equipment and tried to break some of the newly spun fibers. Unlike ordinary nylon, this fiber was very difficult to break by hand. At that moment I knew we had a most unusual fiber.

Fibers are tested for tensile strength, elongation at break, and stiffness. I had the as-spun fibers tested, and the results came back with extraordinary numbers. I had the tests repeated a number of times before I became convinced that I had made a significant discovery. My supervisor and laboratory director immediately realized the potential of these fibers and process, and the program was greatly expanded. This discovery opened up a whole new field of polymer chemistry.

What had you been looking for, exactly?

I had been looking for a lightweight fiber strong and stiff enough to use in reinforcement. At just about this time — it was 1964 — there was talk of a gasoline shortage, and we thought we could use a reinforcing fiber lighter than steel for radial tires. A lighter-weight vehicle would require less gasoline. We were not very successful with the tire industry. It was using cheaper steel wire for reinforcement, and the change to fiber would have meant changing machinery at the tire plants. So we expanded our research for new end-use applications, and we now have more than 200 end-use applications for Kevlar.

Were you involved in finding those applications?

I was not much involved. At the very beginning of the project I did supply a small amount of fiber to one of our scientists who was experimenting with materials for bullet-resistant vests. He wove some fabric from this fiber and subjected it to fired bullets. The results of the preliminary tests were very favorable and gave us immediate hope.

“It was terribly exciting because it was so unexpected.”

Tell me about how you invent.

The fiber field is very complex since it involves many steps, any of which can lead to failures. To invent, I draw upon my knowledge, intuition, creativity, experience, common sense, perseverance, flexibility, and hard work. I try to visualize that desired product, its properties, and means of achieving it. I look for unusual developments that can affect the process, the polymer, and its properties. Some inventions result from unexpected events and the ability to recognize these and use them to advantage. Every invention involves a different strategy.

Was your discovery intuitive or the result of a scientific process?

My discovery involved both intuition and the scientific process. It also involved some good luck and perseverance, when conditions looked most hopeless. An eye trained to observe small differences in progress and product helped too. And creativity made a difference.

How do you account for that? Were you creative as a child?

Yes. As a child during the Depression I did not have many purchased toys. Instead I spent hours drawing fashionable clothes for my paper dolls. When my mother wasn’t home, I secretly used her sewing machine to make clothes for my dolls. Both my parents were creative people, and my father was a naturalist by avocation. I created a number of scrapbooks containing leaves and seeds gathered with his help from a wooded area near my home. I also wrote some poetry and played school with neighborhood children—with myself as the teacher.

What advice would you give to teachers to encourage creativity in young people?

Are you optimistic about the future of women in research?

I think it’s going to get more difficult for them, because of a lesser emphasis on research at the present time. Many women are entering into research with the objective of getting into management after they’ve acquired some experience. I had the opportunity to work in research through my entire career, with the result that I amassed a tremendous amount of knowledge that I was able to use to make discoveries. I think it might be harder for women to make such discoveries without that kind of knowledge base.

What advice would you give to a young woman inventor?

I’d want her to remember that it may take another generation before women are truly accepted on equal terms with men, but that as more women become interested in science, the process will speed up.

Who has been the most significant person in your career?

My mother. My father died when I was ten, and she brought up my brother and me. She was an intelligent woman of great determination and strong will, yet she had a great sense of humor. I’ve always admired her, and I think she was very significant in molding my character and my ability to do the things I later did.

My interest has always been in fabrics, and despite the fact that most interest right now is in natural fibers, I get tired of looking at wrinkled clothes. I’d like to see a new fiber that didn’t wrinkle but that really had the feel of cotton or another natural fiber. However, if I were entering college now, I would probably go into genetics.