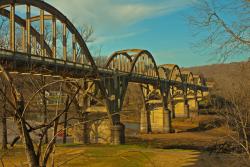 When this 1,850-foot concrete-arch highway bridge was built on the White River in a remote region of northern Arkansas - prior to the construction of upriver, flood-control dams - flash floods occurred frequently, sometimes causing the water to rise as much as one foot per hour. Construction under these conditions presented a clear danger, so project managers specified both a design and an innovative construction method appropriate to the problem of building across a perilous stretch of unpredictable river.

All materials for the bridge's construction were carried into place by a cable system suspended across the river. The bridge itself was built from a design that called for pre-assembled, latticed-steel ribs - fabricated on shore - that served as both structural reinforcement and as the formwork for pouring concrete, thus minimizing the amount of work that needed to be accomplished over the flowing river.