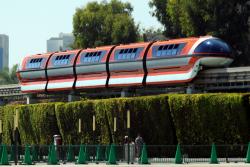 Society
ASME
Main Category
Mechanical
Mechanical
Sub Category
Rail Transportation
Entertainment
Era
1950-1959
Date Created
1959
Location Country
us
Coordinates
33.8128, -117.9167
Address1
Disneyland
Address2
1313 Harbor Boulevard
City
Anaheim
State
CA
Country
USA
Zip
92803
Website
http://www.asme.org/about-asme/history/landmarks/topics-m-z/rail-transportation…
Creator
Wenner-Gren, Axel
ALWEG
Disney engineers designed this monorail system based on the system developed by Axel Wenner-Gren of the Alweg Company in Cologne, West Germany. Wenner-Gren ran his experimental monorail in 1952 on a level track, and when adopted by Disney in 1959, it was designed to simulate the terrain typical of urban transit. Opening in 1959, the system has been in continuous operation as a passenger service carrying an average of 340,000 passengers a year and logging 10,000 miles. The original trains were replaced in 1969 and a new fleet introduced in 1987 to upgrade the existing chassis. Each train is electrically powered by 100-horsepower traction motors run at 35 miles per hour (average). The undercarriage straddles a single beam extending nearly two and a half miles, guided with rubber-tired drive and braking wheels. Germany's Schwebebahn at Wuppertal, which is suspended from an overhead rail, is the world's longest running monorail, operating since 1901. Even earlier, in 1878, a steam-powered monorail system operated in Pennsylvania, and an electric car on a single rail operated in 1892 on Long Island, New York. Drawing by J. Lawerence Lee Copyright authorization is limited to the promotion of the ASME landmarks program, in most cases, and therefore permission to use this image is restricted.
Tags
Disney
Monorail
ALWEG
Wenner-Gren
Walt Disney
Disneyland
Train
Train
Image Credit
Courtesy Flickr/prayitno (CC BY 2.0)
Image Caption
Disneyland Monorail System