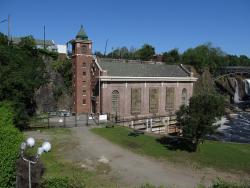 Visionary Alexander Hamilton, the United States' first Secretary of the Treasury, visited the Great Falls of the Passaic River with George Washington in 1778. The 77-foot-high, 280-foot-wide waterfall inspired his dream of abundant, inexpensive energy as the means for economic independence from foreign markets.

In 1791 Hamilton enlisted the aid of some patriots, industrialists, and financiers to form the "Society for Establishing Useful Manufactures" (S.U.M.) specifically to create America's first industrial community. The S.U.M. then hired Pierre Charles l'Enfant and Peter Colt to design and oversee construction of the first raceway and power system in Paterson to harness the Passaic River's energy.

The energy provided by the Great Falls raceway and water power system fostered countless engineering and industrial innovations, including the Colt revolver, the Holland submarine, the Curtiss-Wright aircraft engine, and textile and silk manufacturing which made Paterson famous as the "Silk City."