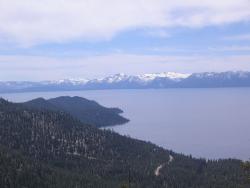 In the mid-1800s Virginia City was America's greatest producer of high-grade silver and gold ore. When mining activities began, natural springs provided water to the camps. As the population grew, the Virginia and Gold Hill Water Company was formed to address the need for more water. The company first drew water from tunnels that had been driven into the mountains by prospectors. Water was stored in wooden tanks and sent through pipes into the town.

But the water supply soon began to wane, threatening a drought. In 1871 the company consulted with engineer Hermann Schussler to develop a plan to bring water from a new source in the eastern Sierra Nevada Mountains.

Marlette Lake Water Supply was the first American water system designed to sustain the high pressures generated by the elevation changes in mountainous regions. Its initial inverted siphon was the largest in the world, and it withstood more than double the pressure of any contemporary pressure pipeline.