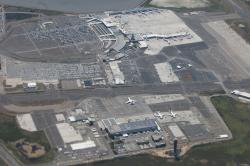 This site, formerly known as Oakland Municipal Airport, served as the gateway to the Pacific during aviation’s pioneering age of trans-Pacific flight. Among other notable events, Albert Hegenberger and Lester Maitland departed from the airfield on 28 June 1927 on the first flight from the mainland to Hawaii, and Amelia Earhart landed here on 13 January 1935, completing the first-ever solo flight from Hawaii to the mainland.