Forth & Clyde Canal and Union Canal 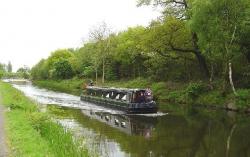 The notion of creating a canal that crossed Scotland was conceived in the 17th century during the reign of Charles II, but would not be realized for nearly 100 years.  The Forth and Clyde Canal, known as The Great Canal in its early years, was the first major transportation project in Scotland and the world's first man-made, sea-to-sea ship canal. 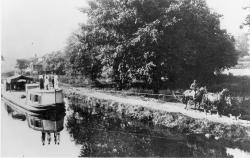 Between 1825 and 1847 the State of Ohio constructed 1,000 miles of canals and feeder canals, 33,000 acres of reservoir surface area, 29 dams across streams, 294 lift locks, 44 aqueducts and many smaller structures at a cost of about 16 million dollars. The network of navigable canals provided a system of economical transportation where none had previously existed; the young state, with its isolated frontier lifestyle, was transformed almost overnight into a thriving segment of the nation's economy. 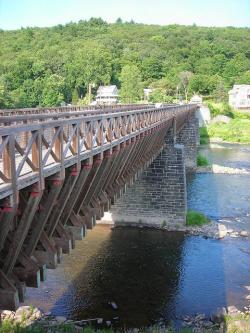 The Delaware Aqueduct provided an important transportation link between the Pennsylvania's coalmines and New York's booming industrial marketplace. It is the earliest surviving work of John A. Roebling, who designed the Brooklyn Bridge  30 years later. The cable anchorage system first used on this project was also used on the Brooklyn Bridge. The aqueduct is patterned after Roebling's design of the Pennsylvania Canal over the Allegheny River, and is the oldest metal strand cable suspension bridge still standing in the U.S. 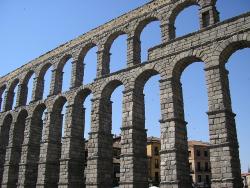 For 2,000 years, Aqueducto de Segovia has been conveying drinking water from the Frio River to Segovia, approximately 18 kilometers away. Built under the reign of Roman emperor Trajan, the aqueduct is one of the most intact and best-preserved Roman engineering masterpieces. Roman engineers built the channel of the aqueduct with an average one percent gradient over its whole length. 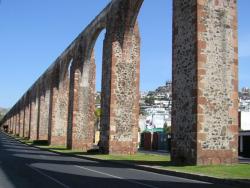 Queretaro's aqueduct, in Central Mexico, is one of the most eloquent symbols of colonial Mexico. As one of the early major hydraulic engineering projects in North America, it defines the city both nationally and internationally. The aqueduct, designed in 1723 by Juan Antonio de Urrutia y Arana, Marquis of Villa del Villar del Aquila, was inspired by the aqueducts of Segovia, Merida and Tarragona in Spain. It began supplying clean water to the city in this arid region of Mexico on October 17, 1738.

The roman emperor Trajan ordered a new aqueduct be built to bring fresh water to Italy's Trastevere region and parts of Rome. The water is collected from five springs that feed the lake at Bracciano, and traverses over 25 miles into Rome. To maintain an even gradient, the aqueduct follows a meandering alignment through the countryside to avoid hills and major valleys. The water runs through an open-channel canal that is either arch-supported, at-grade, or underground. 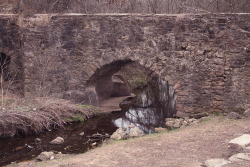 This is one of the earliest uses of engineered water supply and irrigation systems in the United States. The first of eight original acequias was under construction in 1718 and two are still in operation. The remains of one are visible on the grounds of the Alamo. The Acequias of San Antonio are among the earliest engineered water supply and irrigation systems recorded in the United States. The Acequias served an integral role in the growth and stability of the San Antonio community for nearly 200 years.